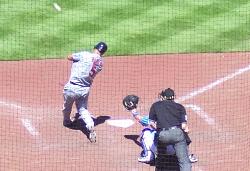 National League manager Clint Hurdle will bat Albert Pujols in the cleanup spot as the DH in this year’s All-Star Game.  Pujols may have the opportunity to face Cliff Lee of the Cleveland Indians, tonight’s American League starter.

As far as Ryan Ludwick, I would expect Hurdle to leave his player Matt Holliday in the game a little longer in right field, and perhaps Ludwick would replace Ryan Braun of Milwaukee in left field who is batting seventh.

With Mariano Rivera on the American League roster, don’t expect to see Joakim Soria closing out any potential win, especially with this game at Yankee Stadium.