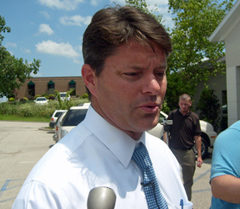 House Speaker Rod Jetton (R-Marble Hill) defends himself in the wake of recent attacks over his political consulting company, insisting his company has followed all state law. This follows criticism from Lieutenant Governor Peter Kinder (R-MO) who has put forward an ethics reform proposal that would prevent elected officials from working as political or fundraising consultants.

During his time at House Speaker, Jetton has been involved in campaigns and fundraising for fellow lawmakers, which he insists is completely legal and is in complete accordance with the rules of the Missouri Ethics Commission.

Jetton does express concerns over Kinder’s call for the ban on consulting work, saying when Kinder announced a run for Governor earlier this year, the Kinder campaign asked Jetton to come on board. But Jetton endorsed Kenny Hulshof and says that put a strain on his friendship with Kinder. Jetton says he doesn’t understand how Kinder could want to hire the Jetton consulting team in January, then says in July that Jetton should not be in the consulting business.