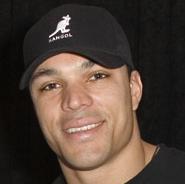 Tony Gonzalez was having dinner last week at a restaurant in California, when a nearby patron started choking.  When no one else in the restaurant reacted, the Chiefs tight end sprang into action.

Saying that he had never performed the Heimlich manuever, Gonzalez said he just reacted.  In a release, Ken Hunter said that his second bite of his steak became lodged in his throat and he couldn’t force it down or out.

Gonzalez said he was scared and his adrelaline was pumping and was obviously glad the way things turned out.

As far as Hunter. He is a Chargers fan, but said he will start cheering for Gonzalez.