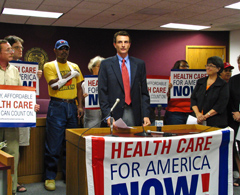 A coalition of groups calls for an emphasis on reforming America’s health care system, but doesn’t endorse any particular plan.

The coalition operates under the overall name of " Health Care for America Now ". It launched its $40 million campaign with a news conference in Washington, D. C. as well as coordinated news conferences held in 52 cities across the country, including Jefferson City. The news conference held in the Capitol was one of 38 held in state capitals throughout the United States. The coalition doesn’t endorse any specific plan, but wants health care that is universal and doesn’t deny coverage due to pre-existing conditions.

Missouri Pro Vote’s Ben Murray kicked off the news conference at the Missouri Capitol by stating that the country’s health care system is broken and the question is not about Republicans or Democrats, but about making sure all Americans have health care coverage.

The coalition, though, is made up of a number of groups that typically support Democrats, such as the Service Employees International Union (SEIU), the American Federation of State, County and Municipal Employees (AFSCME), the Association of Community Organizations for Reform Now (ACORN), MoveOn, the National Education Association (NEA) and Planned Parenthood, does the coalition have the make-up needed to convince both Democrats and Republicans that health care must be a priority issue?

Murray says the coalition has reached out to both sides of the political aisle. He surmises that some Republicans will be more receptive than others.

Others at the news conference objected to the premise of the question, such as Dr. Hope Tinker, who has a private practice in Fayette. She says she treats both Democrats and Republicans and people of all parties are both concerned about the issue and have personal stake in it.