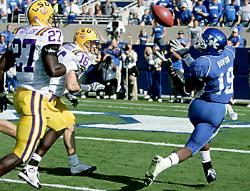 The Rams signed fourth-round pick Keenan Burton a wide receiver from Kentucky to a three-year contract.  Terms of the agreement were not released.

Burton’s, 182 receptions are good for fourth on Kentucky’s career list.  Burton is the third Rams’ pick to sign, joining guard Roy Schuening, selected in the fifth round, and tackle John Greco, taken in the third round.