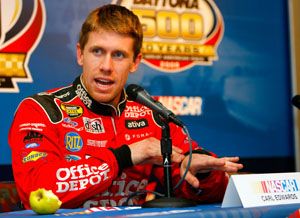 The NASCAR season is at the halfway point, following Saturday night’s Coke Zero 400 at Daytona Speedway.  A wild finish, as Carl Edwards from Columbia, found himself hovering around the top 10 with 23 laps to go, but a series of caution flags including one with less than three laps to race, cost Edwards a chance at winning.

Kyle Busch was just ahead of Edwards as the final caution flag came out after a hugh pile up took place behind the two drivers.  Edwards was getting a nice push from Matt Kenseth on the outside and needed a little more time and he felt he would have passed Busch.

To Busch’s own admission, he didn’t have a great car, but had just enough to hold on after the race was frozen.

Edwards talks about wanting to win and how Busch may give himself a pretty good cushion come Cup Chase time if he keeps winning, but Edwards also says not to count him out of anything just yet.