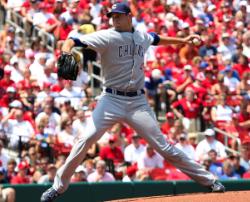 Sunday’s game was anticlimatic following Saturday’s come from behind win for the Cardinals, as the Cubs take two out of three following a 7-1 win at Busch Stadium.

Todd Wellemeyer has gone a month now without a win as he lost his third straight decision giving up three runs in just five innings of work.  Wellemeyer not too concerned and he knows what he needs to work on to get the job done.

Manger Tony LaRussa was a little more concerned by the fact the team just didn’t get very good at-bats off Cubs pitchers in the final game.  Sean Marshall picked up his first win of the year as he went six innings and gave up one run while scattering six hits and walking one.  The one run Marshall allowed was a solo home run to Ryan Ludwick.

The bullpen gave up four runs in the last three innings.  Chris Perez, Russ Springer, and Brad Thompson all touched by runs.

The loss drops the Cardinals into a tie with Milwaukee, both clubs 3.5 behind Chicago.