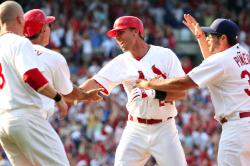 Rick Ankiel singled up the middle with two out and the bases loaded off Cubs’ closer Kerry Wood to comeback and beat the Cubs 5-4.  The hit ended a great day for Ankiel who homered in the game earlier and finished with three RBI as the Cards got back to 2 ½  games in the National League Central.

The Cardinals were down 4-2 in the ninth when Wood (4-2) walked the first two batters he faced Adam Kennedy slapped an RBI double down the right-field line to make it 4-3. Wood then intentionally walked pinch-hitter Chris Duncan to load the bases for Skip Schumaker, who grounded to third to Aramis Ramirez, who got the force at home.

Wood then got Ryan Ludwick to pop up behind second base, before Ankiel singled in two to send a record crowd of 46,865 home happy.  At least the fans dressed in red went home happy.

Jim Edmonds who has been the center of attention this entire series was involved in another key play as Edmonds tried to score but was thrown out at home by Ryan Ludwick for a double play that would have put the Cubs up 5-2.