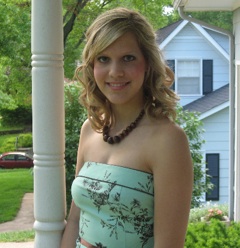 A Missouri high school journalism student has gained national recognition for her work. The Student Television Network has picked Washington High School’s Christie Nicks as its Student of the Year. STN is an internet-based program encouraging scholastic broadcasting and video production.

She’s the first Missouri high school journalist to wins the national award. She says Washington High School journalism teacher Michelle Hoch changed her life. "All my life Iwanted to go into the medical field," she says, "Then I took an introduction to broadcast journalism course and it just kind of sparked my interest in journalism. (Instinct) just kind of took over from there and (I) just found out I that I really loved it, that I really loved telling other people’s stories and it’s just kind of become a great passion of mine."

Christie says she was surprised to hear she had beaten high school journalists from throughout the country . She calls the recognition "flattering." She says she was shocked that a girl "from a little rinky-dink town in Missouri" could become the network’s national student of the year.

But "rinky-dink" towns are not necessarily an impediment to achievement in electronic journalism. Tom Brokaw grew up in Webster, South Dakota, a town of fewer than 2,000 people. Dan Rather’s home town of Wharton, Texas, has about 9200 residents today. One of the original "60 Minutes" reporters, Harry Reasoner, was from Dakota City, IA, where fewer than 1,000 people live today. And Chet Huntley, whose partnership with David Brinkley helped establish the 30-minute network evening news, was from Cardwell, Montana, a town of only about ninety people today.

She’ll enter the University of Missouri this fall, chasing a journalism degree.

(For some samples of her work, go to www.schooltube.com/search.aspx?q=christie+nicks)