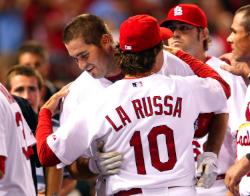 Troy Glaus hit two home runs as the Cardinals jumped out to an early lead, only to have to battle back to tie the game and then win it in the bottom of the 9th with his second home run of the game.

Glaus hit a three run homer off Mets starter Pedro Martinez in the first to get the Cards off to a 4-0 lead.  The Mets tied the game off Cards starter Joel Pineiro who gave up three runs in the 3rd and another in the 4th.

Pineiro got the no decision having given up four runs on 11 hits.  The Mets took a 7-5 lead in the 7 th, after LaRussa called on Mark Mulder who gave up two hits, a wild pitch and hit a batter apart of a three run inning.

The Cards battled back, after Ryan Ludwick got hit by a pitch to lead off the 8 th , Chris Duncan hit a two run homer to tie the game.  Then in the bottom of the 9 th Glaus hit his second of the game, just barely clearing the wall in left field.

Glaus talks about the night.