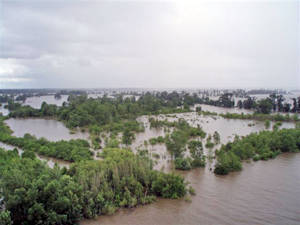 Missouri’s Agriculture Director has returned from a tour of farmland in northeast Missouri, farmland that looks more like a lake than a field right now.

State Agriculture Director Katie Smith took a different kind of farm tour near Winfield. Smith got into a boat provided by local residents. A group floated well above flooded farm fields to view the breach in the secondary levee that ruined weeks of hard work. Floodwaters rushed through, destroying homes and flooding fields.

Smith got a first-hand look at flood fields near Winfield, West Quincy, La Grange and St. Charles. She met with farmers who still express hope that they can put in some sort of crop once the floodwaters recede. The Missouri Farm Service Agency is collecting data from county offices to gauge the economic impact of the flood.

Touring the after-effects of disaster is all part of the job for an Agriculture Director, but perhaps too much of one for Smith. She jokes about touring flooded fields her first week on the job and, now, her last week.