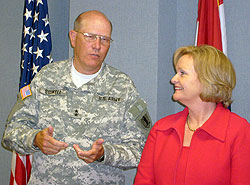 Senator Claire McCaskill (D-MO) has met with leaders of the Missouri National Guard to discuss the readiness of men and women in the Guard. And, by all accounts, the Guard is ready to take on any and all challenges.

McCaskill says Guard members who took part in flood relief efforts along the Mississippi River have earned high praise for their work. She adds exercises in emergency duty help with recruitment because the men and women of the Guard are seen in a positive light … and a lot of young people get the idea they would like to join the National Guard.

National Guard Adjutant General King Sidwell says he cannot say enough good things about the work his men and women did during the flood relief. He says that while the Guardsmen and women were not able to prevail against the river in Winfield, the Guard did win a lot of friends, and he says he’s proud of the members of the National Guard.

McCaskill did raise a concern over challenges involving equipment. Specifically, she says more needs to be done to allow Guard members to train with vehicles they will use when they are sent to war zones.