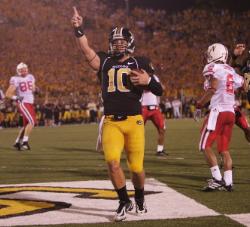 University of Missouri junior quarterback Chase Daniel (Southlake, Texas) was named Friday as the Big 12 Conference Male Athlete-of-the-Year, as announced by the Big 12 Conference office.  Daniel was selected by a panel of league media, over a group of talented student-athletes from each school, and he is the second consecutive Tiger to win the award.  He joins former wrestling great Ben Askren, who won the 2006-07 honor.  The award is based on a combination of athletic performance, academic achievement and citizenship.

Daniel was chosen for his outstanding 2007 season, which saw him become a Heisman Trophy finalist (finishing fourth in final voting) after helping lead the Tigers to a 12-2 season that included the school’s first-ever Big 12 North Division title, as well as a 38-7 win over Arkansas to claim the 2008 AT&T Cotton Bowl Classic – MU’s first New Year’s Day bowl victory since 1966.  An outstanding student, Daniel was an ESPN The Magazine/CoSIDA 1 st -Team Academic All-District selection in 2007, as well as being named 1 st -Team Academic All-Big 12 for his efforts in the classroom.

"What a great honor, this is a really special award to have your name attached to," said Daniel.  "There are so many great athletes in this league in all the sports, it means a lot to be chosen over everyone else.  I’d like to accept the award on behalf of my teammates and coaches, I know you have to put one person’s name on the award, but I really see this as our team being rewarded for everything we did together," he said.

"This is a great way to wrap up what was an outstanding year for our program," said Head Coach Gary Pinkel.  "Chase obviously deserves so much of the credit for what we were able to do last year, but it doesn’t surprise me in the least that he’s deferring the credit to his teammates – that’s the type of leader and teammate he is.  He’s just a first-class representative of this program and this University in every way imaginable, our fans should be very proud to call him one of their own," Pinkel said.