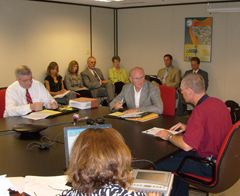 A boundary dispute involving the Kansas City and Independence School Districts has been settled by a Board of Arbitration appointed by the State Board of Education.

The dispute stems from the November 7th decision by voters in both districts to have Independence take control of eight school buildings – one of them vacant – that had been part of the Kansas City District. The question of compensation arose with the sides unable to reach a deal, so the matter ended up in Jefferson City. The decision has Independence paying Kansas City a net payout of approximately $12.8-million.

Dan Colgan, Chairman of the Board of Arbitration, believes this is a good deal because nobody is completely happy. The money going to Kansas City could rise by as much as $847,000 depending on whether Independence accepts any or all of the desks, chairs, computers, or other personal property in the buildings.