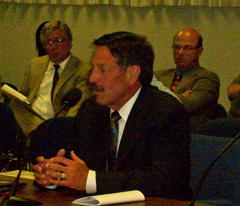 It’s been about a year since the State Board of Education removed accreditation from troubled St. Louis Public Schools and instituted a Special Advisory Board to run the district’s financial and academic operations. And, Rick Sullivan, the CEO of the Special Board, has updated the State Board on progress that is being made.

In a related development the State Board of Education has extended the life of the special board running the Wellston Public School District, which lost its accreditation three years ago.