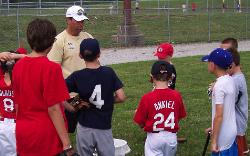 I’m joined on this week’s Press Box by Mizzou baseball assistant coach Evan Pratt.  The Tigers won 39 games this year, made it to the Miami regional, and reached as high as number 2 in the nation, but Mizzou has higher expectations including hosting a regional again and making it to the College World Series.  When Coach Pratt is not helping the Tiger hitters or working with the infielders, he’s spending part of his summer running youth baseball camps up in Columbia and that’s where I caught up with Coach Pratt this week.