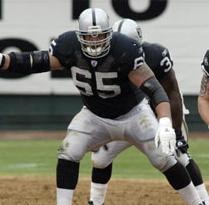 Sims has played the last nine seasons with the Oakland Raiders.  It was figured that the Rams would be in the running for the veteran lineman, as St. Louis looks to rebuild their offensive line.  Sims, 6’5 300 lbs. also visited New England and Baltimore, but his final choice came down to San Fran and the Rams.

As it does in most cases, it came down to money for Sims who would have had the best chance of starting with the 49ers and Rams.