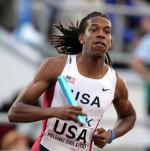 "Miles has had two terrific workouts since we returned from the NCAA championships and he is ready and confident," said Southeast coach Joey Haines who continues to coach Smith at the Abe Stuber Track & Field Complex. "Miles has signed with an agent but has not yet signed a professional contract. He will enhance his professional career with a good showing at the trials. Miles is ready to run fast at the trials and has a legitimate chance to make the U.S. team. Our goal is to be in the top eight."

"Because of his injury in the OVC championships we really didn’t have any good workouts prior to the NCAA championships," Haines said. "Despite the lack of hard training, Miles was still able to place sixth and that has really bolstered his confidence. I know he feels he can make the U.S. team."

Regardless, his agent has him lined up for meets in Europe beginning in August.

Smith won a gold medal as a member of Team USA in 2005 at the World Championships.