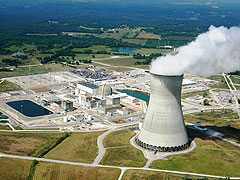 Senator Kit Bond (R-MO) has met with employees of the Callaway Nuclear Power Plant in Fulton to talk up the importance of nuclear power as part of the solution to America’s energy problems. The visit was part of Bond’s "Let’s Get Real About Our Energy Future" tour across the state.

Calling nuclear energy safe, reliable and affordable Bond says obstacles have been put in the way of constructing new nuclear plants and other parts of the solution, which include building oil refineries and expanded drilling for oil.

Bond claims America has not faced up to the choices it must make, saying nuclear power is produced more cheaply than other forms of energy and it is pollution free. He adds America is on the verge of a nuclear power renaissance, saying we will not be able to afford energy in the future if we do not have nuclear power. It is imperative, says Bond, that America get over the NIMBY – Not In My Back Yard – philosophy when it comes to energy production and exploration.

Part of the presentation focused on expansion plans at the Callaway County facility, which is owned and operated by AmerenUE – the state’s largest electric utility. Proposals call for a new phase of the plant which would be known as Callaway 2. Building the facility would cost between $6-million and $7-million.  If the project gets off the ground it could be up and running by 2018.