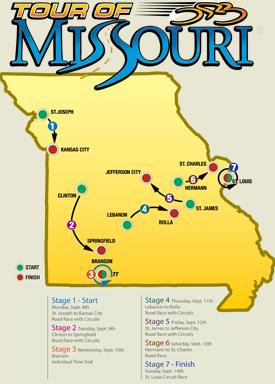 The Tour Of Missouri bike race will enter its’ second running this September.  The race will start in St. Joe on Monday, September 8 th and end in St. Louis again on the 7 th and final stage on Sunday, September 14 th .  Last year’s winner George Hincappie will return to defend his title.

After stopping in Kansas City after day one, the race continues from Clinton to Springfield, with stage 3 being an individual time trial in Branson.  From there the race goes from Lebanon to Rolla.  Stage 5 is a ride from St. James to Jefferson City.  Columbia is not a stop in this year’s race as the second to last stage will start in Hermann and make its way to St. Charles, the second longest stage of the race on Saturday the 13th.