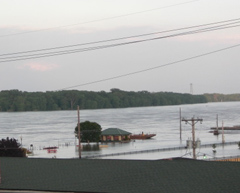 As some Missouri communities cope with Mississippi River flooding, others are dealing with the aftermath of the flooding, and state health officials want people in flood zones to take precautions.

Drummond says there should be a plentiful supply of tetanus vaccine at local health agencies.

Previous Post: « Royals comeback to shock Giants
Next Post: A Missourian has a bit of advice on military matters in the Middle East »