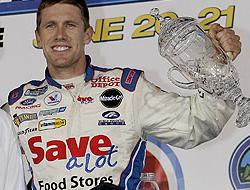 Carl Edwards ended a year-long winless drought on the Nationwide Series by winning at Milwaukee at the Camp World RV Rental 250.

Team owner Jack Rousch made a change in crew chiefs earlier in the week and that must have helped as the defending series champion finally took the checkered flag after 36 races without a win.  In a classic Missouri vs. Kansas rivalry, Edwards bumped past Clint Bowyer to take the lead with 38 laps to go and held off rookie Joey Logano to score his 14th career win in the series.

Edwards last win before this was in June of 2007 at Nashville.