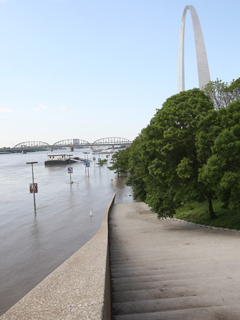 A tense waiting game is being played out in northeast Missouri. The Mississippi River, swollen from the heavy rains that saturated Iowa, laps up against temporary sandbag levees as residents desperately attempt to keep it from overflowing communities and farmland north of St. Louis.

Susie Stoner, a spokesman for the State Emergency Management Agency , says a lot of concern is centered on Louisiana and Clarksville where the Mississippi is expected to crest tomorrow. Winfield has already had to endure a couple of levee breaks, with the crest there not anticipated until Monday. The National Weather Service has lowered crest expectations, mainly because the failure of some agricultural levees upriver in Missouri and Illinois has taken pressure off the downstream communities. The Mississippi is not expected to rise any more than seven feet above flood stage in St. Louis; high, but manageable.

The US Army Corps of Engineers reports that 14 levees have either been overtopped or breached. Thirteen of the 14 levees are agricultural levees. The Corps reports that the Mississippi River at Hannibal dropped a foot and a half overnight to just below 27 feet, more than a foot over flood stage.  The Mississippi is a foot above flood stage at Louisiana as well at 25.4 feet. The National Weather Service predicts the river will rise again this weekend, before settling back down and slowly dropping.

Sandbagging continues in West Quincy, Canton, Hannibal, Louisiana, Clarksville and Winfield as residents hope to shore up levees weakened by the constant pressure of floodwaters. Volunteers have been helped by around 700 National Guard troops who have worked both to help with sandbagging and to provide security.

Previous Post: « NWMS assistant to teach football in Europe
Next Post: MSU Board of Governors approves budget for 2009 »