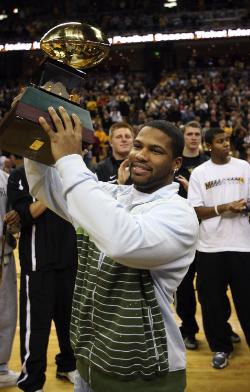 The Kansas City Sports Commission held their annual banquet last night at the Sprint Center, where they named former Mizzou running back Tony Temple their male athlete of the year.

Temple played his high school ball in the Kansas City area at Rockhurst.  Of course, Temple capped of his career at MU by setting the rushing record at the Cotton Bowl in Missouri’s win over Arkansas.

Temple is pursuing a career in the NFL.  He’s worked out for a handful of teams including the Chiefs and was invited to the Cleveland Browns minicamp in April, but was cut.