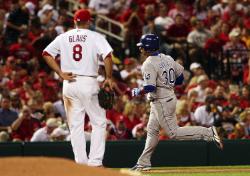 The Royals take game one of this I-70 series with a 2-1 win over the Cardinals.  Royal’s shortstop Mike Aviles homered off Cards reliever Ron Villone in the 8 th .

In 12 games since being called up from AAA Omaha, Aviles is hitting .333 and that was his third home run.  Cardinal’s pitcher Joel Pineiro pitched well, giving up just one run in 7 innings.  That came when the Royals manufactured a run in the 5 th when starting pitcher Kyle Davies bunted Ross Gload over to 2 nd setting up a two out single by David DeJesus to tie the game.

Davies, in his fourth start since coming up from Omaha has allowed just one earned run in each start.  Davies gave up a run in the third inning trading it for a double play.  That came when Cesar Izturis double and moved to third on single before scoring on the double play ball.  Davies is now 3-0 with a 1.46 ERA.  Joakim Soria picked up his 18 th save after Ron Mahay held the Cardinals in the 8th.