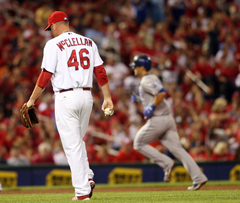 Braden Looper gave the Cardinals a solid outing, going seven innings allowing just one run on five hits, but did not get the win.

He entered the seventh having given up only two hits, but ran into a bit of trouble.  Looper got two outs after Royals’ third baseman Alex Gordon reached on a ground rule double.  Mark Teahen reached on an infield single when Aaron Miles couldn’t get the ball to Chris Duncan in time at first, then John Buck delivered a two out single to left.  After a visit from pitching coach Dave Duncan, Looper got Ross Gload to ground out to first and Looper left with a 2-1 lead.

Royal’s manager Trey Hillman talked about his starter Brian Bannister having a good night if he avoided the big innings, but the first could have gotten out of hand.  Skip Schumaker and Aaron Miles started with singles giving the Cardinals first and third and nobody out, but Bannister got a sac fly from Ryan Ludwick and weak outs from Rick Ankiel and Troy Glaus to escape the jam.

The Cardinals scored again in the 4 th when catcher Jason LaRue hit a bouncer up the middle with runners on first and third and two outs.  Bannister got a glove on the ball to slow it up enough that second baseman Mark Grudzielanek couldn’t go anywhere with it and Rick Ankiel scored.

LaRue was involved in another goofy play when he singled and then should have been doubled off on a line drive hit by Cesar Izturis that was grabbed by Bannister who threw wildly trying to double off LaRue.  The ball rolled down the right field line allowing LaRue to go all the way to third.  Adam Kennedy then hit a sinking line drive to left where Jose Guillen made a shoestring catch saving the run.

In the sixth, Guillen made an outstanding throw when nailed Ryan Ludwick at third as he was attempting to tag up on a deep fly back to the front of the track.

Once again the Cardinals bullpen failed.  Kyle McClellan gave up a home run on the first pitch to David DeJesus with one out in the 8 th tying the game at two.  Then with two outs, Alex Gordon followed with a deep blast to right and just like that KC was up 3-2.

In the bottom of the 8 th , Schumaker and Miles went to work again opening up with singles off Ramon Ramirez.  After getting Ludwick to fly to left, Hillman called upon Ron Mahay to face Ankiel to strike him out.  Glaus then grounded to short to end the rally with runners stranded on first and second.