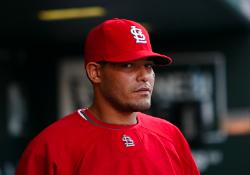 Yadier Molina was back in the dugout last night just two days after a vicious collision that left him with a concussion.

Molina could play as early as Thursday, although he said in an emergency he could be used.  He rode the stationary bike and participated in light workouts on the field.

The only lingering effects he feels are a few "cobwebs" from the headaches, but has not body aches at all.  Molina says he watched the replays and it was scary to see.

Good news for Chris Carpenter. He met with Dr. James Andrews for a second opinion on his elbow.  Everything looks fine, so the soreness he feels is just part of the healing process that some pitchers experience after having Tommy John surgery.  He’ll throw a bullpen session next Wednesday.  He’s still shooting to pitch this season for the Cardinals.

Todd Wellemeyer will miss his next start because of some elbow pain.  He missed a  week before getting pummeled by Philly.  The team will re-evaluate after a week off.

Download/listen to Yadi on his concussion (mp3)