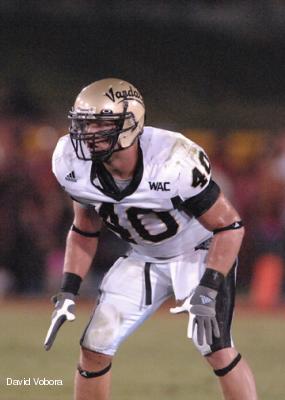 The final pick of the NFL draft is called Mr. Irrelevant in part because of the fact that 250 or so other players were selected ahead of them meaning the odds are high that the last player selected could make an NFL team.

That’s according to the boneheads who as kids were praying in the school yard that they wouldn’t be the last kid picked.  You know, the one that nobody wanted, but had to take.

I want to introduce you to the Rams final pick of the 2008 draft.   His name is David Vobora.  (photo courtey of Idaho Athletics Media Relations)  He was linebacker at the University of Idaho and was anything less than irrelevant when he played for the Vandals.  He led the WAC in tackles the past two seasons and was a leader in a program that saw three different head coaches during his college career.

While I felt uneasy calling David "Mr. Irrelevant," he’s actually flattered by the title and all the notoriety that goes with being the last pick in the NFL draft.

He’s a class act guy and by the end of this podcast, you’ll be pulling for this year’s Mr. Irrelevant, David Vobora.