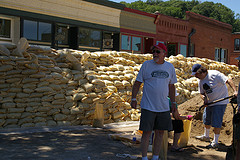 The swollen Mississippi River is causing big problems in northeast Missouri, with several communities experiencing flooding. Lieutenant Governor Peter Kinder, who is Acting Governor while Governor Matt Blunt is out of state, says the number of National Guardsmen helping the hard hit areas is on the rise.

Kinder says officials are in constant touch local authorities to keep track of the goings-on in the flooded area. Kinder says about 360 National Guard members have been deployed to the flood hit areas. That number could rise, depending on the need. [ More photos of flooding , courtesy of KJFM/Eagle102 ]

Kinder points out there is some bad news in that more rain is in the forecast in the coming days.