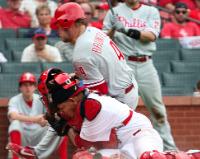 Catcher Yadier Molina got clocked in the back and then hit his head on the ground in a nasty collision at home plate with the Phillies’ Eric Bruntlett. Somehow Molina held onto the ball for the out, but suffered a mild concussion in the process.

According to the Cardinals’ medical staff, Molina sustained a mild concussion and will remain hospitalized overnight as a precautionary measure.  After he was carted off the field, Molina was transported to a local hospital where he will be evaluated for back and neck pain.

The play happened with runners at the corners, and Jimmy Rollins hitting a sharp ground ball to Chris Duncan at first base who fired the ball home to Molina, who just got the tag on Bruntlett before he took a shot to the head.

Replays show it may have been Bruntlett’s elbow that hit Molina in the head or in the neck, and Molina fell head-first to the ground, holding onto the ball for the out.   No Cardinals were blaming Bruntlett for the injury.

After the game manager Tony LaRussa shared the team’s concern for their number one backstop, while Molina’s back-up Jason LaRue talks about his admiration for Molina and his efforts.

Download/listen to comments on Yadi (:31 mp3)