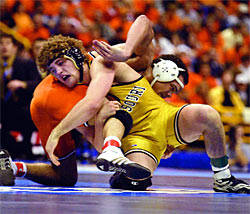 Former Missouri Tiger wrestler Ben Askren qualified for the Olympics while winning at the Thomas & Mack Center on the University of Nevada campus.

Askren is only the second Missouri wrestler to qualify for the Olympics and first since 1991 All-American Sam Henson captured a silver medal at the 2000 Olympics in the 54 kg weight class.

Askren is one of seven freestyle wrestlers that will represent Team USA in Beijing, after going 3-0 at the all-day tournament. Seeded No. 1 in his weight class, Askren, held off No. 9 seed Donny Pritzlaff by decision, 3-0 and 1-1. Advancing in the championship bracket, Askren topped No. 5 seed Ramico Blackmon, also  1-0 and 2-1. The final match paired Askren with second-seeded Tyron Lewis. In a best-of-three series, Askren won the first two bouts of round one, 2-0 and 1-0 to record the win. Competing in round No. 2, Askren lost the first bout 6-2, but rattled off a 2-0 and 1-0 win to earn his first Olympic bid.

Askren became Missouri’s first National Champion after capturing the 174 pound title as a junior in 2006. The Tiger grappler repeated the feat as a senior in 2007.