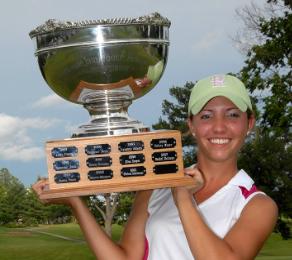 The 48th Missouri Women’s Junior Girls Championship was held at A.L. Gustin Golf Course on Friday in Columbia MO.  After a rain delay of five hours, the skies cleared and the second round concluded for the age group of 16-18 year olds.  The groups for ages 12-15 completed the tournament after 18 holes, along with B Flight of the 16-18 year old competitors due to severe weather.

Catherine Dolan was one over for the day after hole #12 where she struggled to reach the green in regulation and three putted.  Her closest challenger, Hanule Seo of Chesterfield, was having a rough day, but managed a beautiful chip in birdie on the 14th hole while Catherine bogeyed for a two shot swing.   Hanule stuck her approach shot on 16 to within five feet, but missed her birdie putt which all but ended her run at the title.  Catherine’s putting wasn’t as sharp as usual, but she managed to hang tough by parring the 17th while Seo bogeyed  the hole after missing the green and hitting a thin chip to the far side of the green.   Catherine’s 18th hole tee shot drifted to the right and landed on the outer lip of the fairway bunker.  Hanule’s perfect drive allowed her to stick her approach shot to a couple of feet for a tap in birdie, but it was too late to stop Catherine Dolan’s steady play of 75 to capture the title.