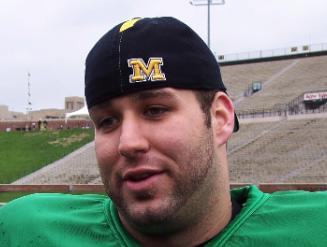 Missouri Tiger senior quarterback Chase Daniel has been named as one of 26 standout QB’s who are eligible to win the 2008 Johnny Unitas Gold Arm Award, which is presented annually to the nation’s top senior collegiate quarterback.

The award, which began in 1987, takes into consideration on-field accomplishments, as well as off-the-field traits of character, citizenship, scholastic achievement and leadership qualities.  Daniel broke numerous records in 2007 as he helped lead the Tigers to one of the best seasons in school history, which included an MU-record 12 wins (12-2 overall), and a program-best No. 4 final ranking in the Associated Press Top-25 poll.  Mizzou also claimed its first-ever Big 12 North Division championship, and won its first New Year’s Day bowl game since 1966, with a dominating 38-7 triumph over 25 th -ranked Arkansas in the 2008 AT&T Cotton Bowl.  Daniel finished fourth in Heisman Trophy voting in 2007.

The 2008 winner will be presented with the award on December 5 th at the Tremont Grand Meeting & Banquet Facility, in downtown Baltimore, Maryland.