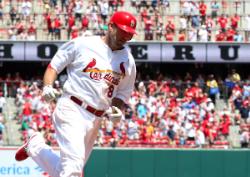 Phillies’ relief pitcher Tom Gordon missed a throw from first baseman Ryan Howard while trying to cover first on a ground ball hit by Chris Duncan.  Howard’s throw got away from Gordon and the Cardinals scored the winning run in the bottom of the 10 th for a 6-5 win.

The Cardinals take two out of three bouncing back from a 20-2 loss on Friday.  St. Louis jumped out to a 5-1 lead after three innings thanks to home runs by Skip Schumaker and Troy Glaus in a three run third.

Cards’ starter Mitchell Boggs was lifted in the 5 th after the Phillies cut the lead to one.  Leading 6-4 in the 8 th inning, the bullpen stumbled again as Randy Flores and Russ Springer each walked in a run to tie the game six.

In the bottom of the 10 th , with two outs Rick Ankiel reached on a throwing error by Chase Utley.  Glaus made the Phillies pay for their mistake as he singled Ankiel over to third.  That’s when Duncan tapped to first and Ankiel scored on the misplay at first.