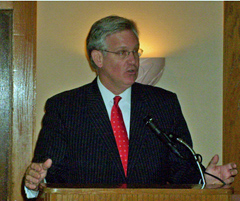 Missouri’s press associations welcome the major Republican and Democratic Party gubernatorial candidates to an open forum at Lake of the Ozarks, with an hour devoted to Republicans Sarah Steelman and Kenny Hulshof and an hour for Democrat Jay Nixon.

Issues discussed included the 2005 Medicaid cuts, solvency of the Second Injury Fund, the value of tax credits to businesses, and transportation.

Republicans Steelman and Hulshof agreed Governor Matt Blunt faced difficult challenges, adding changes to the Medicaid system had to be made, but both candidates would like to make some changes to the cuts that were made. Nixon is clear he would restore the cuts. 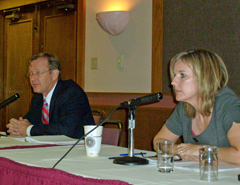 Steelman and Hulshof also sparred over Washington versus Missouri attitudes. Steelman accuses Hulshof of embracing what she calls Washington big spending. Hulshof defended his actions in the Nation’s Capital, saying he is proud to represent the people of Missouri on Capitol Hill.

The format of the open forum was such that Hulshof and Steelman were seated at the same table, and were given the opportunity to answer questions and offer rebuttals to each other’s answers. Nixon, with no opponent, took the podium and took questions from reporters for a little more than three quarters of an hour.