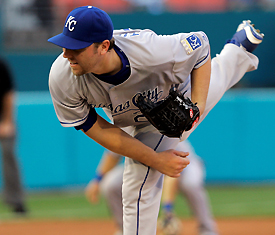 This morning as I was writing my story on the Royals loss I added "Brett Tomko, proving his comeback should come to an end gave up three runs in the 9th including Murphy’s second home run of the game."  That was the case, the Royals designated Tomko for assignment.

Brett Tomko is out and Carlos Rosa is in as the Royals try to shore up their bullpen after Tomko was hammered in the 9th inning by the Texas Rangers in the 11-5 loss on Wednesday night.

Rosa was promoted from Triple-A Omaha where he was 2-1 with a 3.96 ERA in five starts. He was assigned to the bullpen by the Royals.  Tomko signed a one year, $3 million dollar contract this off-season with the Royals.

Previous Post: « Steelman announces expansion of MOST scholarships
Next Post: Can NBA refs influence the outcome of games? »