You are here: Home / News / Can NBA refs influence the outcome of games? 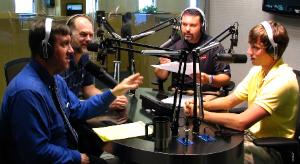 I sat down with my Missourinet buddies to discuss a little NBA action.  Yes, Missouri hasn’t seen an NBA team since the Kansas City Kings left in 85, but we also had the St. Louis Hawks when the won the NBA title in the 1958 season.

I wonder if there were any referee controversies back then?  Even before this whole Tim Donaghy came out with his allegations of the Lakers-King debacle, I was questioning some of the calls in these Lakers-Celtics finals which the NBA and ABC/ESPN has been drooling over since the semi-finals.

I’m joined by Brent Martin, Steve Walsh, and JTI (Jon the intern) as we discuss whether or not refs can affect the outcome of the NBA playoffs.