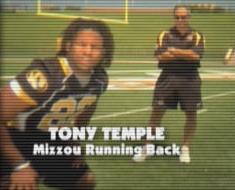 A University of Missouri football television ad for the 2007 season featuring former tailback Tony Temple and Head Coach Gary Pinkel was named best in the nation today by the National Association of Collegiate Marketing Administrators (NACMA) Board of Directors.

The :30 second television commercial, titled "Speed," featured Temple dashing quickly around a stationary Pinkel, in order to show the speed and quickness the Tigers had in store for what would prove to be a memorable 2007 season.