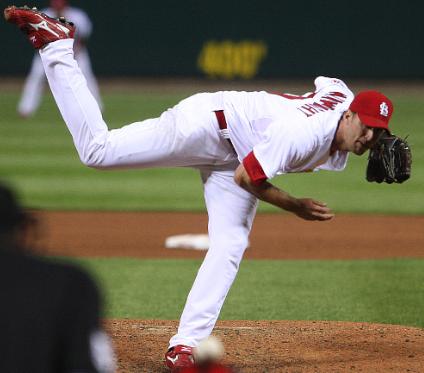 Just as Cardinals starting pitchers Joel Pineiro and Todd Wellemeyer have been cleared to return the rotation, the Cardinals got news that Adam Wainwright is headed to the DL with a finger sprain.

Wainwright hurt his finger in his last start at Houston on Saturday when he had to leave in the sixth inning.  Wainwright said his finger felt sore while he was warming up in the bullpen, but was able to make the start.

With Chris Carpenter and Mark Mulder starting the year on the disabled list, Wainwright took over the roll as the staff’s ace and has risen to the challenge.  Wainwright is 6-3 with a 3.14 ERA this year.

Meanwhile, both Joel Pineiro and Todd Wellemeyer were cleared to rejoin the team after suffering from injuries. Brad Thompson also made his first rehab start at Triple-A Memphis.

Pineiro has been on the DL since May 21 with a right groin strain and likely will be activated this week. Wellemeyer experienced right elbow inflammation after his Thursday start at Washington and will rejoin the starting rotation immediately.

Tonight, Mitchell Boggs will make his first major league start as the Cardinals open a series with last place Cincinnati.