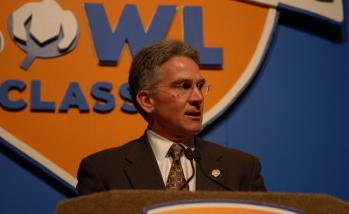 University of Missouri Director of Athletics Mike Alden received an honor from the National Association of Collegiate Directors of Athletics (NACDA), when he was named the AstroTurf Athletics Director of the Year for the Football Bowl Subdivision’s Central Region.

Alden will be honored at NACDA’s 43 rd annual convention at the Hilton Anatole Hotel in Dallas today, during the James J. Corbett Awards Luncheon.

It’s been a banner year for Mizzou Athletics, culminating with another NCAA Regional appearance by the Tiger Baseball program and a NCAA Super Regional berth on the softball diamond for second year head coach Ehren Earleywine. Overall, the Tigers had 16 of 20 sport programs qualify for postseason competition, including Gary Pinkel’s Football team, which achieved a No. 1 national ranking, a Big 12 North Division crown and a resounding 38-7 win over Arkansas in the 2008 AT&T Cotton Bowl.

Academically, Missouri set the standard for Academic Progress Rates (APR) in the league, with seven of 20 programs being cited nationally for excellence in the classroom. Those seven nationally recognized programs ranked among the Top 25 in America, alongside such programs as Harvard, Stanford and Yale. Overall, Missouri led the Big 12 in APR in nine sports and had 14 of 20 teams rank among the Big 12’s top two.