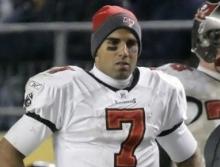 Gradkowski played in 17 games over the past two seasons with Tampa Bay and started 11 games last year.  The Bucs had six quarterbacks and let Gradkowski go this past May.

Brock Berlin, listed third on the Rams’ depth chart will most likely be cut to make room for Gradkowski.