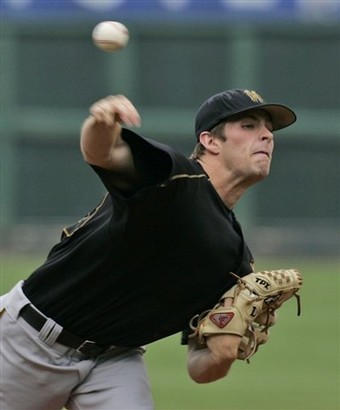 Missouri Tiger junior and right handed pitcher Aaron Crow became the highest draft pick ever for the Missouri Tigers when he was selected 9th overall by the Washington Nationals in Major League Baseball’s amatuer draft.

Shortly after having his name announced I had a chance to talk with Aaron about the whole day.  I could tell he was still trying to soak everything in.  I asked him to walk me through his whole day which started with a rude awakening in the morning to trying to relax by spending time with his family.

Now the tough part begins for Crow.  He doesn’t have much time to decide if he wants to sign with Washington or return for his senior year at Missouri.  After talking with him though, my guess is that he will begin his career as a professional baseball player.

In case you don’t know much about Aaron Crow.  The Big-12 Conference Pitcher of the Year set Missouri’s single-season record for wins (13) and posted a string of 43 scoreless innings pitched, which is unofficially tied for the fourth-longest streak in NCAA Division I history.

Crow’s 13 wins also led the NCAA and he finished sixth in strikeouts (127) as well. His strikeouts are tied for the second most in Mizzou school history and his 277 career strikeouts are the third most ever by a Tiger pitcher.