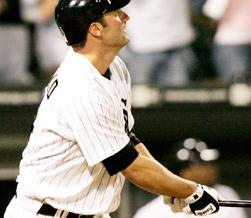 Chicago’s Paul Konerko continued his dominance over Royals pitcher Jimmy Gobble as he connected off the lefty in the bottom of the 15 th with a two run walk-off home run to beat Kansas City 6-4 .

Konerko is now 5 for 6 with four home runs in his career against Gobble who came on to start the bottom of the 15 th .  Gobble walked lead-off hitter Carlos Quentin before the home run.

Former Royals reliever Octavio Dotel pitched 2.2 innings of relief to pick up the win.  The Royals tied the game in the top of the ninth when David DeJesus singled in two runs off Sox closer Bobby Jenks.

The Royals have allowed seven home runs in the first two games of this series.  Starter Luke Hochevar who pitched 5.2 innings gave up four runs thanks to two home runs allowed.  Hochever gave up a two run homer in the fourth to Jim Thome which erased a 2-0 Royals lead after solo home runs from Miguel Olivo in the second and Mark Teahen in the fourth.  Westphalia, Missouri native Joe Crede then went deep on Hochevar in the bottom of the fifth.

The three homers last night go along with the four allowed the night before by Zach Greinke.

Previous Post: « Chiefs practice on Saturday open to the public
Next Post: Blunt calls for consolidation of Eckersley lawsuit »