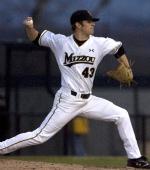 Missouri Tiger junior pitcher Aaron Crow, is one of five finalists for the USA Baseball’s Golden Spikes award given to the nation’s top amateur baseball player.

The Big-12 Conference Pitcher of the Year set Missouri’s single-season record for wins (13) and posted a string of 43 scoreless innings pitched, which is unofficially tied for the fourth-longest streak in NCAA Division I history.

Crow’s 13 wins also led the NCAA and he finished sixth in strikeouts (127) as well. His strikeouts are tied for the second most in Mizzou school history and his 277 career strikeouts are the third most ever by a Tiger pitcher.

The 2008 GSA will be awarded on July 16 as part of a production by Major League Baseball and MLBAM that will be streamed live on the Internet exclusively at GoldenSpikesAward.com and MLB.com.