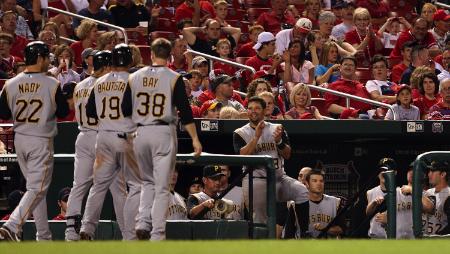 Adam Wainwright was cruising through six and a third innings, having given up just three hits and holding a four run lead.  That’s when the bottom fell out with Pittsburgh coming back for a 5-4 win.

Wainwright gave up a double to Jason Bay and walks to Xavier Nady and Jose Batista before pinch hitter Jason Michaels launched a grand slam to tie the game in the 7th.

Wainwright was left in the game to pitch the 8th inning as Tony LaRussa decided to leave his ace to finish.  Jason Bay hurt Wainwright again with an RBI double to drive in the go ahead run.

In the post-game chat, Wainwright talks about his performance and LaRussa says his pitcher should be frustrated by the loss.

The Cardinals 3.5 games behind Chicago who won for the 8th time in a row.  Former Cardinal Jim Edmonds has helped sparked the Cubbies.  He’s 7 of his last 11 with four doubles, a triple, a homer, and seven RBI.