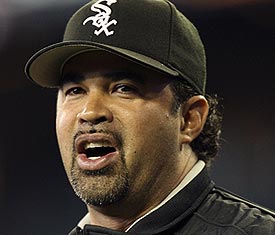 The Royals are in Chicago tonight to play the White Sox, where manager Ozzie Guillen is back in the news after saying his team can’t win with the offense he has.

Their GM Ken Williams said he didn’t appreciate getting thrown under the bus by his manager who Williams has repeatedly supported anytime Guillen has been criticized in the media.

Guillen has never minced his words when it comes to evaluating his team, umpires, opponents, etc.

Williams sent an e-mail to mlb.com in response to a profanity filled post-game tirade by Guillen on Sunday after the Sox dropped a close game to Tampa Bay that said, "I don’t have the time or patience for any of this…just win."

Hopefully, this is a good time to be catching the Sox, who are a very streaky team.  Despite the Sox recent troubles (having lost their last three), they hold a half game lead over Minnesota in the AL Central.

The Royals are 7.5 games out in last place.  If the Royals would have gone .500 at 6-6 instead of their 12 game losing streak, their record would be 29-28 and just a game and a half behind Chicago in third place.