You are here: Home / Sports / Barbara Berkmeyer–in a class by herself 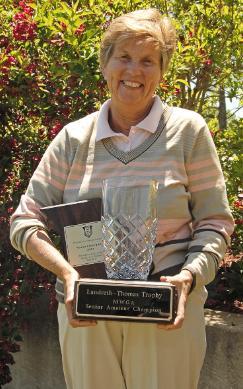 It doesn’t matter if you’re a golfer like me who goes out 5-10 times a year and gets excited about shooting under 100, or you play on a weekly basis and shoot in the 80’s.  I want you to consider the following for a moment.

Imagine if once a year, you got into a golf tournament with golfers who were of the same skill level as you, and in the same age range.  Now, think about how difficult it would be to win one of those tournaments?  No doubt you’d feel pretty good right?  What do you think your chances would be to win that same tournament the following, and then the year after that?  Even the most confident of golfers would think it would be near impossible; and if were to happen, it would take an extreme amount of luck to win back to back, much less three times in a row!  So, what if I asked if you could win that tournament NINE times in a row?

You’d laugh at me, call me an idiot and say it was impossible.

Well, meet Barbara Berkmeyer.  She did exactly that.  (No, not laugh at me and call me an idiot)  She is a member of the Missouri Women’s Golf Association.  Just a couple of weeks ago, Barbara won the Missouri Women’s Senior Championship in Bonne Terre, MO.  She shot a 153 over 36 holes beating her next closest opponent by five strokes.  It was her ninth women’s senior golf championship in a row!

No years off in between.  Not nine titles over 15 or 20 years.  Nine championships in a row.

I’m not going to tell you how old Barbara is, she reveals that in this week’s podcast, but not only does age come into play, or good health, but just the fact that for 18 rounds of golf during this run, Barbara has had to overcome bad lies, putts that lip out, wind, weather from hot to cold to wet, various courses, perhaps competing against other golfers who were playing the round of their life, while maybe Barbara wasn’t quite hittin’ em well…and on top of that the ability to block out any pressure of retaining that remarkable championship run…oh say after winning two of these tournaments.

As I listened to Barbara, it was pretty easy to figure out why she has been so successful.  It is her attitude.   Don’t get me wrong, this woman has been golfing since she has been four, she has an extreme amount of talent.  However, her approach to a game she loves is what sets her apart from her peers.  Listen to our conversation.  I’m sure you’ll enjoy her stories and her approach to the game of golf.

Congratulations Barbara, what you have accomplished in my mind is absolutely incredible.