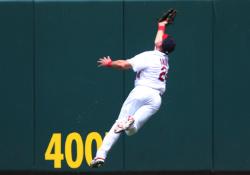 The Cardinals won 7-4 on Sunday beating the Pittsburgh Pirates to remain just 2 1/2 games behind the best team in baseball, the Chicago Cubs.  The Cardinals are winning with great defense.

Rick Ankiel made a diving catch of Xavier Nady in the second inning which would have meant extra bases, and then the Cardinals strung five hits and a walk off Pittsburgh starter Ian Snell to score five runs in the bottom of the second.

Braden Looper improved to 7-4 after going 5 2/3 innings allowing three runs.  Ryan Franklin picked up his sixth save shaking off two hits in the ninth to get out of a late Pittsburgh rally.