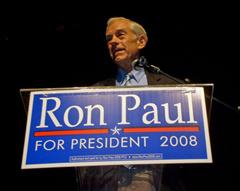 He concedes he will not win the Republican presidential nomination, but Congressman Ron Paul (R-TX) remains in the race, as part of the effort to get out his message. That message is one of limited government and more individual freedoms, elimination of the federal income tax, withdrawal of U.S. troops from Iraq, and doing away with the Patriot Act.

Paul was in Branson over the weekend to speak to many of the Republicans attending the State Party Convention. He doesn’t understand why, in his view, so many of his supporters were denied a welcome mat at the convention.

Paul says the Republican base is getting smaller, not larger, and he thinks anyone who can garner the votes he is capable of bringing in would be welcomed.