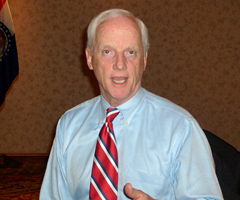 He’s not interested in being the Number 2 guy on the presidential ticket … and he isn’t looking for a cabinet post in a McCain Administration, but former Oklahoma Governor Frank Keating (R-OK) is going all out to send the Arizona Senator to the White House.

Keating, who now represents the U.S. life insurance industry with the American Council of Life Insurers, is involved in a number of volunteer positions in the McCain campaign, including Catholics for McCain, which he co-chairs with Senator Sam Brownback (R-KS). He brought that support and enthusiasm to Branson over the weekend to talk up McCain to Republicans attending the GOP State Convention.

During a meeting with a handful of reporters, Keating praised McCain as someone who has proven he can work well across party lines. He points to what is a very contentious issue among many conservatives – McCain’s refusal to go along with what became known as the "Nuclear Option" to end a Democratic filibuster of President Bush’s judicial nominees.

McCain organized several Republicans and Democrats into a group known as the Gang of 14 to force up or down votes on a number of the President’s nominees. Keating says without the Gang of 14 several of those conservative judges who are now serving – including Supreme Court Chief Justice John Roberts and Associate Justice Samuel Alito – would not be where they are today.

Having nixed the idea of being a VP candidate, Keating did say he would be "thrilled" to help McCain. Asked if he had his eye on anything in particular, Keating joked, "Some place that’s exotic."